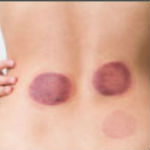 Cupping in its most basic form is one of the oldest and most universally practiced medical treatments in the world. Cupping is used widely in the world for many different reasons and the origins of cupping can be dated back to at least 3,500 years ago.

Typically when we think of cupping we think of the round marks on people that are often associated with cupping. Recently at the Summer Olympic Games in Rio many of the U.S. swimmers including Michael Phelps were seen with cupping marks on them.

So what are these marks and why would anyone want to subject themselves to a treatment that might leave those marks on them for a short period of time?

Since we tend to associate red marks with bruising it is important to distinguish cupping marks from bruising. Bruising occurs when there is an impact injury which causes rupturing of underlying blood vessels leading to edema and the gathering of sticky proteins which often results in pain and sometimes dysfunction. In contrast vacuum or negative pressure produced during cupping can draw up stagnant blood and cellular waste from tissue or from an injured area to the surface of the skin which can result in cupping marks. This helps normal, healthy, oxygen rich circulation of blood flow return to an area. Cupping marks or discolorations can take anywhere from a few hours to roughly two weeks to completely fade depending on the amount stagnation involved. As cupping treatments are used more frequently in any region these marks will occur less often as the area becomes more vital.

When we use cupping as a part of a treatment plan we do so for several reasons. Cupping allows us to decompress tissue by creating a negative pressure above the surface of the skin. Other soft tissue techniques tend to be compressive in nature where we use our hands or other instruments to push on the tissue and compress it in order to treat a patient.

The negative pressure from cupping pulls tissue up and away from other structures and loosens areas of adhesion and restrictions. As a result of cupping tight contracted tissues will soften and blood vessels dilate allowing us to direct blood flow into painful areas that are ischemic or lack good blood flow.

Cupping has a vast array of benefits for many patients and can help many different conditions such as but not limited to: poor circulation, edema, sports injuries of many types, foot and ankle pain, headaches, fibromyalgia and other forms of muscle pain. We also use dynamic cupping to improve the range of motion of many joints like ankles, knees, hips, shoulders, and elbows.

There are several different techniques when it comes to cupping. In sports medicine a variety of cupping techniques might even be used on the same individual to achieve some of the outcomes that we listed earlier. Cupping may also be used along with other treatments to optimize a patient’s outcome. Each patient's condition and treatment goals will be considered by our chiropractors and physical therapists when considering whether cupping will be used.

At Arvada Sport and Spine Group cupping is one of many interventions that we use to give our patients a first class experience. Give us a call to see if cupping makes sense for you.